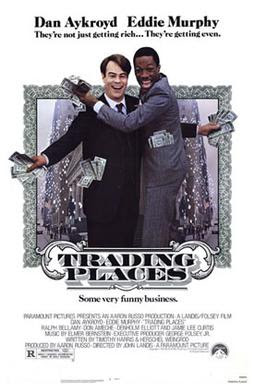 Now I know many might argue with this being a Christmas film, because it includes a prostitute, insider trading, and some questionable "monkey" business.  However, there's nothing more Christmas-y than a rags to riches story.  And at least it takes place during the holiday season, with major scenes on both Christmas and New Year's Eve.  Add in some revenge and lots of laughs, and you have a great film for anytime, not just Christmas.

This was from a time when both Eddie Murphy and Dan Aykroyd were just starting their movie careers.  This was prime comedy from both of them.  Add in other standards like Ralph Bellamy, Don Ameche, Denholm Elliot, and Paul Gleason, then a dash of Jamie Lee Curtis in her first real comedic turn, and you have the makings of a comedy for any age (minus the kids, because again of the prostitution and "monkey" business).