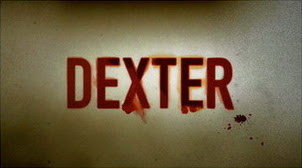 After always being told how good a show it was, I recently decided to sit down and watch Dexter.  Once I did this, I found it difficult to stop.

An interesting premise, where the protagonist is a serial killer who kills other killers. The show does an exceptional job with it's treatment of the subject matter. It has to walk the thin line of maintaining Dexter as a tolerable sociopath-with-homicidal-tendencies; a vigilante who doesn't do it for justice but instead to satisfy his own urges. The show has an undercurrent of internal dialogue from Dexter, providing his motivations along with plenty of black humor to maintain interest. Without it, the show would slip into even darker territory though, as it allows for humanizing this decidedly inhumane being. Overall, especially the first season, the interactions of this wolf-in-sheep's clothing with the rest of the characters continually provides interesting developments.

In the later seasons, however, the show falters some. It has to create reasons for him to change without changing, otherwise they've already hashed over everything there is to the character. Apparently they handle this by also making all the other characters extremely annoying, from Lila to Miguel Prado to all the cops in season 4. It's unfortunate that without the main storyline providing enough incentive, they introduce drama from other angles through general-asshole behavior.

That being said, I felt that season 5 definitely brought back some of the charm, paralleling him with another broken-soul. It also was one of the first times that he almost seemed normal, which is a card they can only play once, but would be interesting to see out.

On the whole, I'd recommend it to others. Not my favorite show out there, but definitely worth watching.
Posted by Zous at 5:00 AM